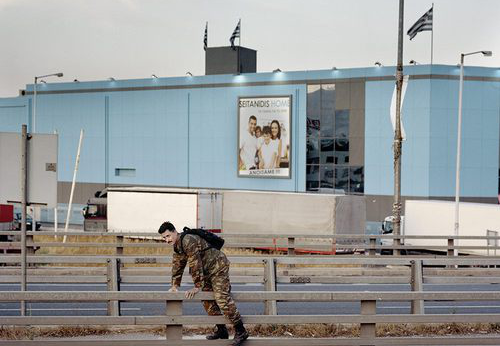 Over the last six years a destructive financial crisis has struck Greece, dismantling an already wrecked social balance and driving the population into a state of collective depression. A condition of stagnation is ruling the capital city of Athens. The project Parallel Crisis is a creative document that addresses the ways in which the Medium of Photography is capable of describing this socio-economical event. An uneasy affinity develops between the property of photography to produce events of immobilised time and the negation of social time that widespread crisis instigates.

What photography is really recording in Greece, is a certain condition of numbness: subjects without the possibility of development, crippling unemployment, confined migrants, neighbourhoods reigned by silence and fear. In these conditions, the Medium suspends time that has already been stalled. Photography itself is conceived as a metaphor, a mirror of the financial crisis.

The idea of a unified Europe is quite a recent concept. From the Roman Empire to Second World War Germany, many reigns have geographically controlled, under one name, several lands of what we today define as modern Europe. However, it is only in the aftermath of the Second World War that the European Union took its first steps towards the current system. Officially established in 1958 as an economic relationship between its six founding members, the EU has grown to 28 nations since 2013.

Conceived as a vehicle to promote social integration and multiculturalism with economic and political stability, while avoiding new wars on the continent, the European Union has brought a certain wellness to its citizens in its first 60 years of life, but it seems still far away from reaching many of its founding ideals. Several issues like the economic and migrant crises, the rise of a new wave of far right movements, the desire for national independence, the growing feeling of insecurity following a wave of recent terrorist attacks, and a certain lack of connection with ordinary citizens’ concerns has begun to put the EU under scrutiny, as well as diminishing trust in the system itself.

As a young European citizen, I feel many questions are arising with respect to such scenarios, with the aforementioned issues playing a critical role in the contemporary debate. For this reason, the selection of works I present in this exhibition aim to recall these challenges Europe is facing, and foster the conversation in a decisive moment for the future of the continent.

In this context, the work of Yannis Karpouzis investigates Athens standing still while experiencing the financial abyss, while on the other side of Europe, the trauma and fractures of people are reinterpreted with humor in Fábio Cunha’s docu-fiction that explores the Spanish housing crisis.

Putting a focus on migration, Charlotte Schmitz collaborates with refugees and migrants by inviting them to write their own stories on photographs made with an instant camera, and Karim El Maktafi takes us on an intimate journey between Italy and Morocco, focusing on the psychological aspect of integration from the perspective of a second-generation Italian citizen.

Again in Italy, the cinematic pictures of Luke Richards’ work disclose the rise of new nationalism by following the reality of far-right groups in Rome, a mirror of a bigger movement which has spread throughout the whole of Europe. The same Europe that the United Kingdom voted to leave. A surge of national independence that is hidden below the surface of places is depicted by Sebastian Bruno, who shows us the community of Blaenavon Gwent, an area of South Wales which was heavily pro-Brexit in the 2017 referendum.

The terrorist attacks in Paris were the starting point for Valentina Abenavoli’s Anaesthesia, a series that helps us experience what violence and evil are, with the author questioning the empathy and grief we experience as humans. The black and white pictures of Federico Clavarino are nothing but imprints of the collective conscience of our society – an invitation to embark on a trip across the continent, looking for traces of the ideas which have designed current Europe since the end of the Second World War.

Which Europe is not intended to be followed as a guide of the continent’s recent past. Instead, this exhibition is a compendium of the issues, traumas, and stories which should invite us to think about what is taken for granted. Which Europe invites the public to reflect upon the current state of affairs, and ask which Europe has it been so far, and in which Europe are you hoping to live in.