Nicolas Marchant: “To photograph is also to learn to approach the right distance of things”

Nicolas Marchant: “To photograph is also to learn to approach the right distance of things”

Nicolas Marchant has been a total pleasure to interview with his special cinematic background and his insomnia which leads to wonderful night captures. He explains all about these things in the interview that follows.

Nicolas, something’s telling me you’ve got a cinematic background. What’s your knowledge on photography and filming?
I am self-taught in these areas. I studied drawing, but I stopped drawing soon after. I needed to be in projects involving other people. I worked as a scenographer for several years. At the end of my studies I also began to discover music via computers and synthesizers. And to do, later, music for the theater, or performance, or dance. Then also do lighting in theater, and a lot of small related activities, artistic or not. These practices have inevitably influenced my view of things.

“Mostly night”. What is so appealing about it?
I am insomniac since the age of 4. 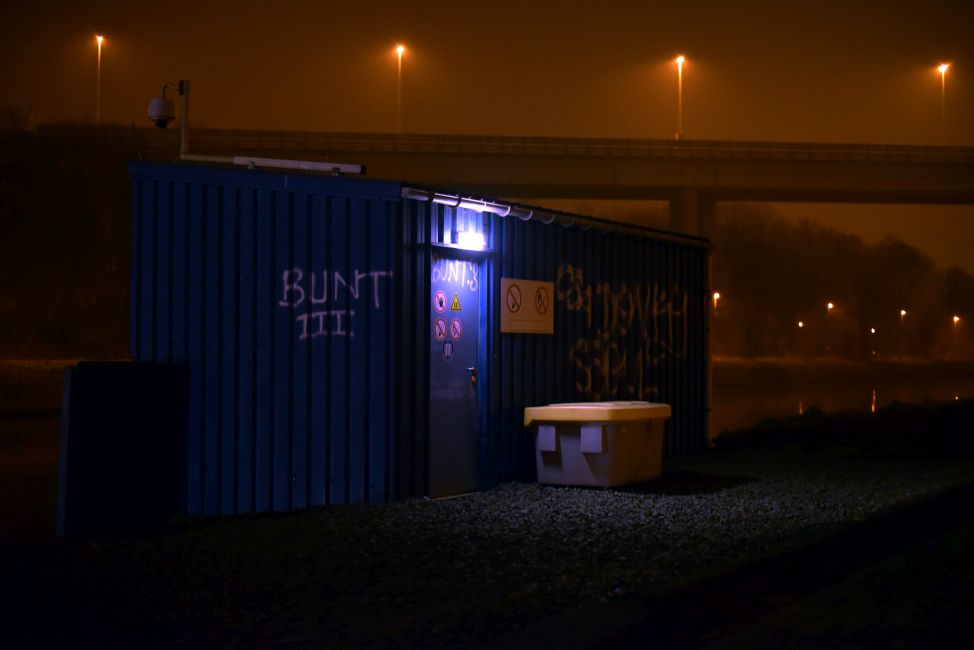 Your photos make me think of independent cinema. Maybe it’s the thematic or the aspect ratio that you use. What are your influences?
I am in cinema as with all the arts, totally scattered in my tastes. My father took me to see Aguirre by Werner Herzog when I was 9 or 10 years old. He shouted to the lady of the reception that he could decide whether his son saw this masterpiece or not rather than small mickeys. I still keep this image of the bodies floating on the river today. I saw “2001” very early, and Stanley Kubrick punctuated my youth with great shocks. Then like many teenagers I watched horror movies, and it’s a genre where so many filmmakers could find greater freedom of expression, like Cronenberg for example, but many others too. I love genre cinema. At the academy my professor of history of cinema made us decompose Japanese films plan by plan. It was fascinating. I like the classics, the weird stuff, the animated cinema and even there it can go from Švankmajer to Pixar while passing mangas, like Akira by Katsuhiro Ōtomo. Or from David Lynch (of course) to Gregg Araki. Recently, after seeing the last Denis Villeneuve “The arrival”, I went to get his other films, which I had never seen before. “Enemy” completely fascinated me. But whenever I’m going to quote you a movie, I’d like to talk to you about another, and it will be of a different kind, and never ending…

You live in a big city and as it happens with most of them, they have a lot of stories to tell. What have you discovered about Brussels through your lens?
Brussels is really chaotic, it is full of architectural and urbanistic absurdities. Even if my pictures do not account for it, because in the night I find things empty, enlightened and ordered, sometimes to the absurd. I am not a very “politicized” artist, but in my eyes this vacuum or this abundance of useless lights is sometimes also a discourse about the social fracture, or about the absurdity of the industrialized world. But it does not prevent me from deeply loving this city, its disorderly mix, which I think is also a bulwark (increasingly fragile) against the liberal contraction of the occidental world. Brussels is also a good mess. I also meet wonderful people there. 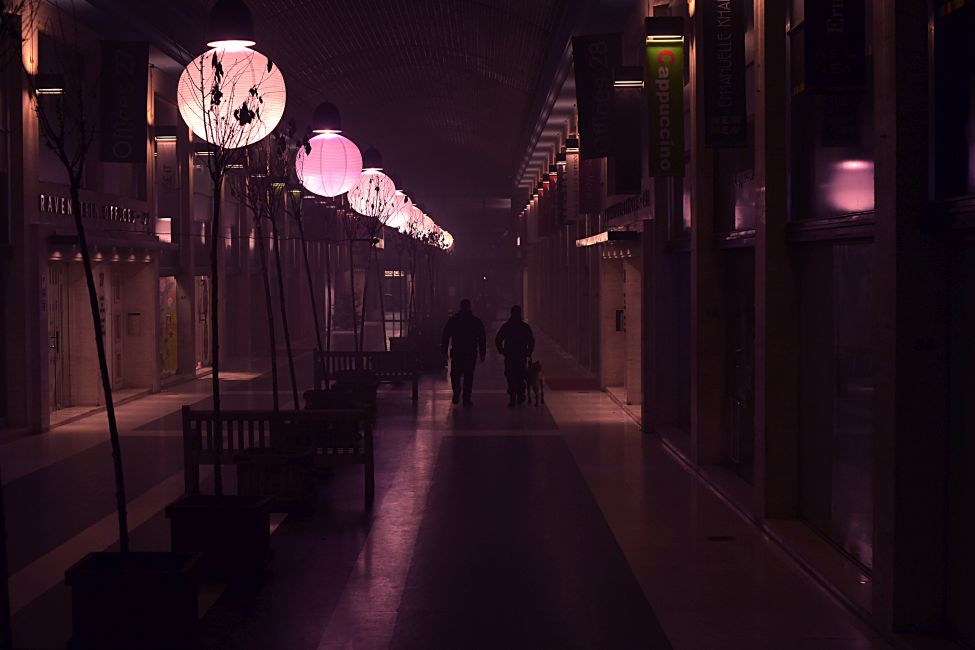 Your music is a combination of spoken word and electronica. Is this concentrated listening interwoven with images you want to create? You’ve used it in your short videos after all.
I could tell you the same thing about music as about cinema. My tastes are totally dispersed. I also do not feel like I really have a style, I adapted a lot to what was needed, especially in the theater. The fact that I do a little of everything, my transversality has given to me many problems of legitimacy. Today and at my age, it is no longer a problem (in the artistic fields at least), so the term “interwoven” pleases me. I’m nowhere in the video domain, but I have already tried stuff, made installations with video, and in these cases, to integrate personal music always fascinates me. The music for me is almost only affective, the fact that I have not studied in this field (I often regret it) greatly reduces my musical vocabulary. But then I try to say things that are very directly touching with this little vocabulary. In this sense, it is a pleasure to associate it with images.The spoken words also help, in my music, to accede to this immediacy of feeling. And I also write, poetry or novels.

Since you prefer to shoot mostly at night, you could have made your photos noir-ish by editing them in black and white. You opted for colour instead. Why is that?
I mainly use a small digital camera mirrorless, with a fixed focal length, a 35 mm. I also have a big reflex with some lenses, all fixed. In fact I edit very little (and very fast) my photos. My little 35mm is a jewel for the colors, in particular to completely “deregulate” the white balance. So I take my pictures directly with totally shifted white scales, to bring out certain tones. Editing work in most cases is just fine-tune the contrast. And, I admit, to reframe again sometimes. I often realize that I should have taken a step or two more to make the frame perfect. To photograph is also to learn to approach the right distance of things. When I get there, I’m happy. I did a lot of pictures directly in black and white too. And I still do it often for portraits, for which I find more often the color superfluous. 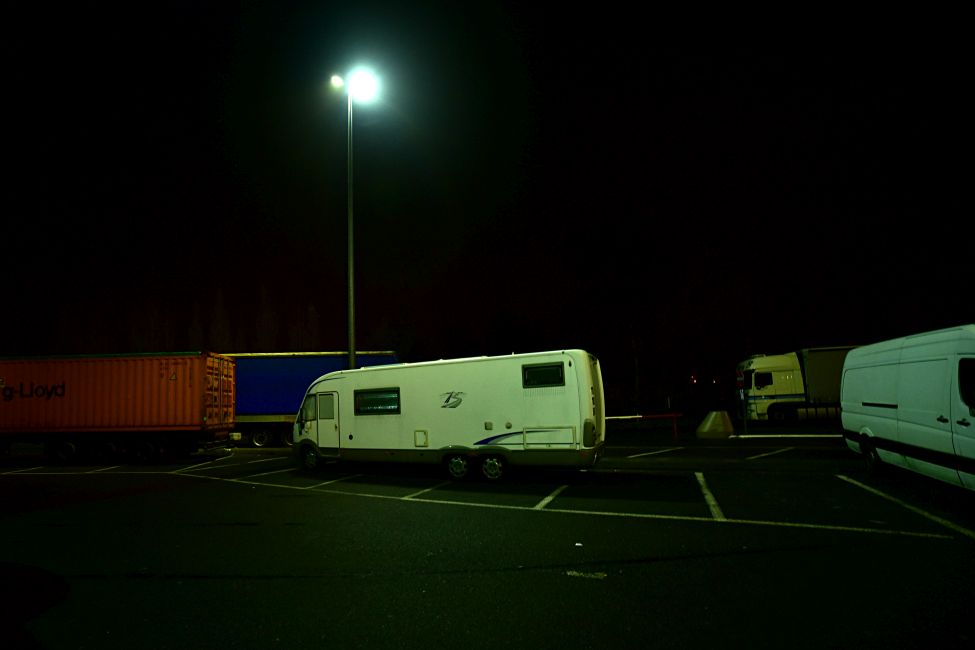 “Un vrai semblant”. A true semblance. Is photography a way to transfer the similarities between real life and what passes through the lens?
Phonetically, in French, “un vrai semblant” seems like “invraisemblable”, “implausible”. Associating “true” and “semblance” more resonates with what I write. I choose that name for my first blog, which is largely a writing blog. It mixes real things and fiction, with a lack of transparency that I do not feel to manage, so much is done in spite of me. But in fact this idea also corresponds fairly well to my music, my photos or my videos. So I kept  it… It’s not really a pseudonym, but more the name of a place to put all my artistic stuffs.

You’ve made these short videos that you put on vimeo. Are there bigger projects at the back of your head?
I write a lot. I was published a little more than a year ago, a small collection of texts and short novels about death ( http://www.maelstromreevolution.org/pages/FRA/prodotto.asp?ProdottoID=358&FamigliaID=0 ). I have other projects in writing that I would like to finish. In music and video, I seek rather to find good collaborations.

info: The interview with Nicolas Marchant was given on 20 March 2017